Tutorial posts may sound a little pretentious, like I’m some professor of life kind of “expert”, but they serve two purposes: One, I get to celebrate something I just made. And two, it’s my way to give back to the Internet for all the times that I’ve searched for “how to” do this or that, and have found a wealth of content telling me exactly how.

So, our baby’s mural is finally done and I absolutely love it. 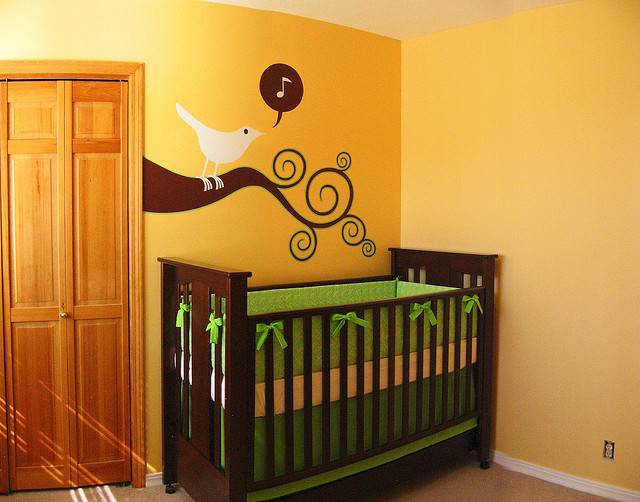 The original image is a vector illustration by Simon Oxley, purchased for $7 at istockphoto.com. The size of the finished mural is 55 x 42 inches (140 x 108 cms). Colors are from the Sherwin Williams palette: “Lime Rickey” (SW 6717), “Arresting Auburn” (SW 6034), and Extra White. The background wall is painted in “Afternoon” (SW 6675) — for those wondering why yellow and not green as originally planned, you missed some drama: Here’s why. All in all, I reckon that the whole project took about 40 hours of work. Yikes!

However, I must say that I am so impressed by my own execution, I thought I’d share my process and what I learned for all those interested in ever doing something like this, because man! if you’re going to bother with a project this ambitious (a great way to forget you still have 10 more weeks of explosive pregnant belly growth to go through), you might as well do it well.

Do a small trial

Before getting on the big boat and potentially ruining the wall, I can’t emphasize enough how helpful it was to run a quick trial of what I would do in small scale first. Because I had been testing my wall colors earlier with a piece of foam board, I had one piece already painted with the exact color of the mural wall. I printed the illustration to fit a letter-size sheet, cut it, traced it, and then painted it on the foam board with the paint I had already purchased for the mural. 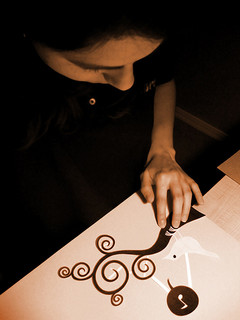 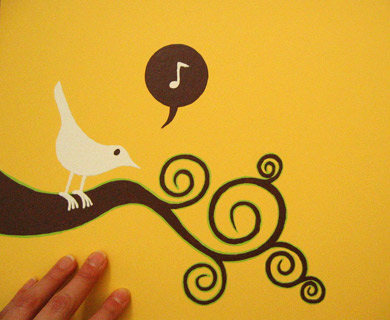 The test was great for these reasons:

It let me test my paint colors and see how they would go over the wall background. I was looking for a very specific shade of “brown”, and if the one I had bought had not been right, I would’ve much rather gotten a new color then than after having painted it thick on the wall.

The practice painting revealed potential problems. For instance, I first drew my green stroke around the branch with the swirls ending in pointy corners. The small test let me see that I didn’t like that look at all, so for the real mural I went with circled ends instead. Also, I didn’t like how white looked painted over brown. No matter how many coats I applied, it still looked slightly yellow, not crisp white. And then, although I was working with tiny brushes in difficult tiny spaces, I saw how tricky it would be to paint the inside of the branch even at a large size. I had thought I would paint the green stroke first following a marked outline, and then “eye” the inner brown boundaries without an outline. The test clearly showed that I couldn’t eye the offset consistently, so I realized that I really needed to trace the inner branch outline too… As much of a pain as the extra work was.

In my master plan, I had placed the mural to fill out the whole crib wall. Would that be too much in real life? I didn’t know…

So, in Illustrator, I opened the illustration file and imported photos of the room and the wall. All along while keeping both of these views at sight, I edited the illustration and sized it according to what I wanted it to look like in the room. I left the branch as big as originally planned and shrunk the bird just a bit. 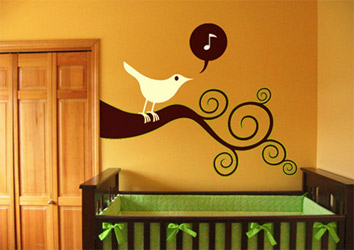 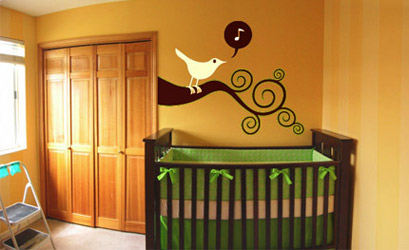 Prepare the image for printing

In the real room, and according to my mockup of the final size of the mural, I measured the approximate width for the life-size illustration (55 inches). Then, I imported the vector illustration into Photoshop at a resolution of 300ppi and a width of 55 inches. I transformed the image to grayscale and adjusted the contrast to make all the different colors visible in different shades of gray. You could leave it in color, but why waste expensive color ink on a paper template?

Then, I set a grid so each quadrant would fit along with a little of the surrounding quadrants on a letter-size sheet of paper (for my printer that was 7 x 10 inches). Using “snap to grid”, I drew a gray grid over the illustration (gray so the grid would be visible over dark and light areas), and I numbered each quadrant containing a portion of the illustration.

Still with “snap to grid” selected, I cropped the first quadrant of the document so that the crop area would be slightly larger than the quadrant in all four directions. That way each portion of the illustration would print with a little bit of the areas surrounding it, and with the grid. You want this to help you align and assemble the pieces later.

Let Photoshop crop the document as selected. Print the quadrant making sure that it fits in the paper without any automatic scaling. That is, you want every piece to print at exactly 100% (no more, no less). Then, immediately undo the crop action to get back to the full document. Repeat these steps with all quadrants until all pieces of the image are printed. 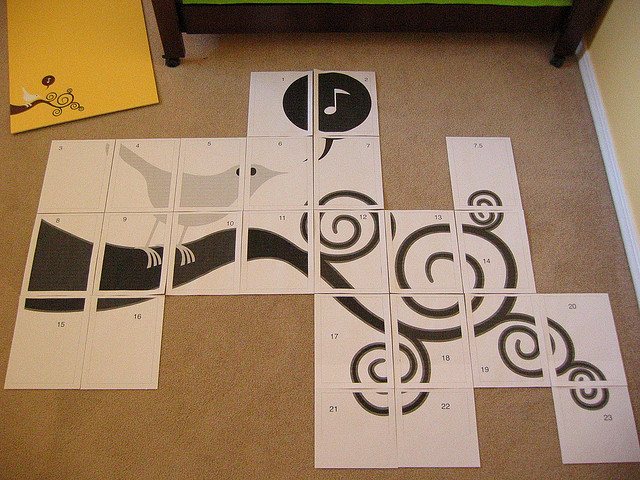 Obviously you could save yourself all this template printing/assembling work if you can get somebody to print your image as large as it needs to be. I wasn’t in the mood for printing experimentation with my local Kinko’s, so I did it myself… the hard way…

Assembling the template goes a lot easier over a window so you can see through both pieces of paper and align them with the help of the grid. 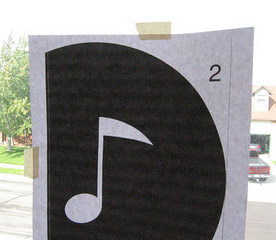 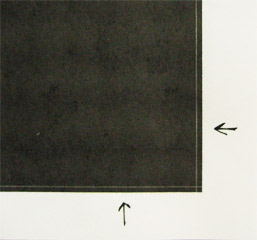 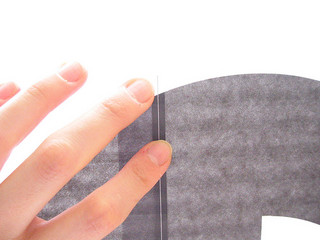 Beginning by the first row, place the right-most piece over the window and secure it with masking tape. Take the piece that goes immediately to the left, and trim the white area on its right and bottom sides (do leave the overlap to the right of the grid). Place this left piece over the right piece and use the grid and the image overlaps to align both pieces. Secure the pieces together with transparent tape and move on to the next piece repeating the process until the full image is assembled. 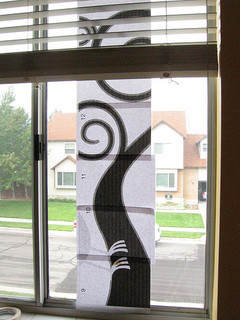 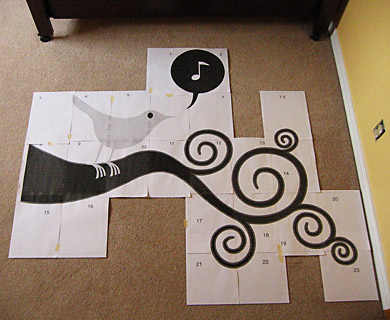 Trace template on the wall

Cut the white off the image to arrive to the actual template —I must say, with this whimsical swirly design, all cutting steps were the longest part of the process. Position the template over the wall (according to your plan) and secure it in several spots with painters tape. Then, using a color pencil close to the color of the wall (or the paint you’ll use), trace the image. 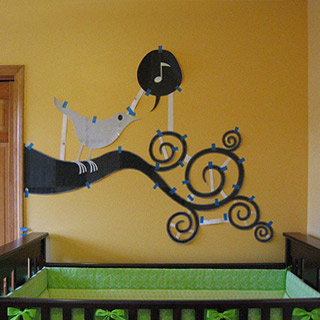 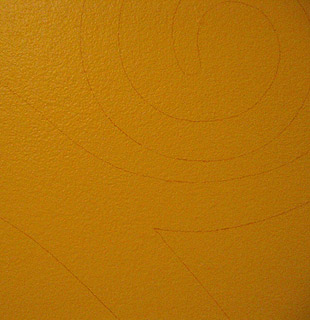 A small foam brush worked best for me. Also, for very tiny spaces, the only thing that worked was a very small flat-tip artist brush.

Knowing that I didn’t want to paint white over brown, I first painted the white areas, and then painted the brown around them, sometimes using painters tape to mask a few straight edges and tricky corners.

I freehanded most of the mural, but when I got to the inner portion of the branch swirls, I realized that the areas were so thin, it would be hard to get in there with the foam brush. So, instead of tackling the whole thing with the tiny artist brush, I went for some dirty masking. Here’s where the paper template was used, and REUSED again…

Going by segments, I cut off the green outline (already painted) to get to a new template for the inner brown area. Positioning the segment over the mural, I traced the new outline. 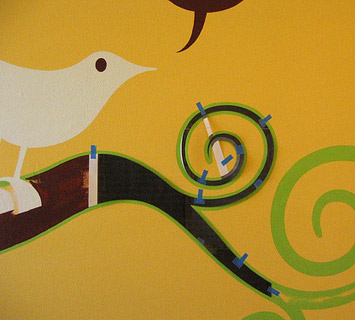 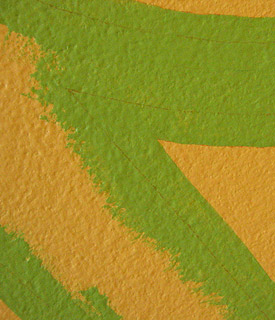 Whatever borders I could freehand, I freehanded. But for the small swirls, I used the template to trace masks with painters tape. 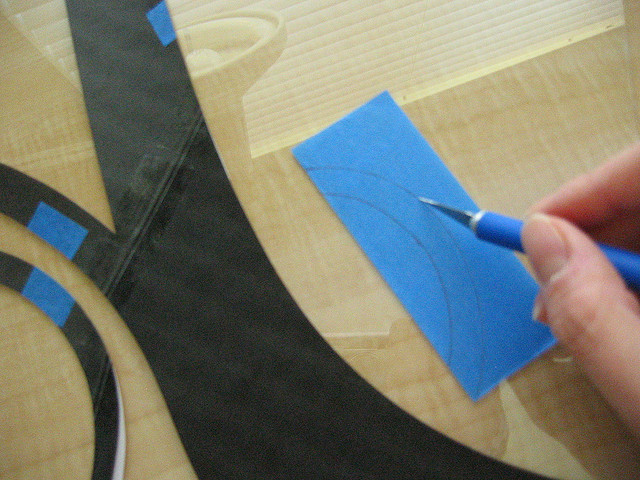 Still carefully, I painted using the masks trying to deposit the least possible amount of paint on the mask borders. My advice here is to load your brush lightly, dab the paint in the middle of the area, and as the paint wears off start approaching the borders of the mask. Blot over the borders when the brush is almost dry, and wait no more than 30-45 minutes to remove the mask. Don’t remove it any sooner either.

So after all this work, you’ll probably tell me that it is so sad to think that one day the mural will be painted over. And that is true… But I guess that when that day comes, it will probably mean that my little boy has grown up and is ready for something new. And that will make me nostalgic, and I’ll probably tear up a bit… But hey, what is life without some good tears? 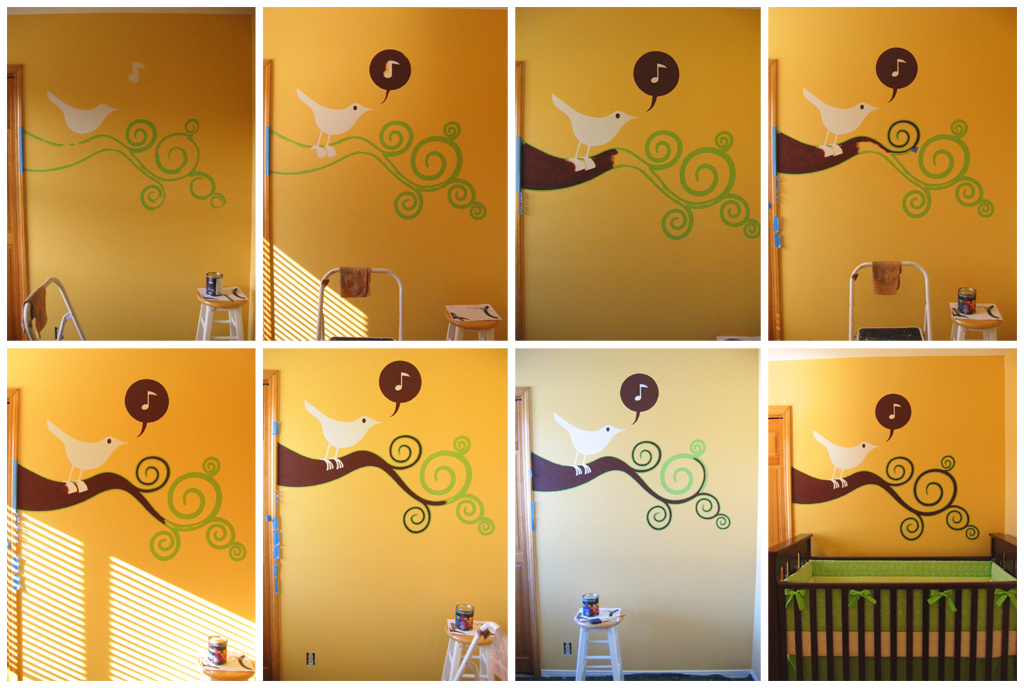