For the last week or so, putting Joaquin down to sleep his mid-afternoon nap has become mission impossible. Mom and I, the two victims of this new behavior, keep theorizing about what may be “wrong”. We strategize. We experiment. We discuss. We fight. We keep trying to make him sleep.

I read that a two-month-old baby should be working towards taking three naps a day. Joaquin currently takes five. Something tells me that this is how he’s starting to drop one of the two extra ones. So one day I decided to let him stay awake all that time until the next feeding. He managed. However, when Joey took him at 3 am for his bottle, baby wouldn’t go to sleep until 6 am. I blamed myself for having skipped that nap. Babies are supposed to sleep better at night when they’ve slept well during the day.

So the theorizing and observation goes on, and at this point I’m convinced that the hell night Joey spent maybe was just a coincidence. Joaquin insists in not staying asleep at that time slot, and so, today I decided to try putting him on the sling… Maybe he’d be happy staying awake and checking mommy’s email, watching her write a blog post and do things she likes… Worst case he’d raise hell, and I would simply dance and rock him as usual until he fell asleep, except, doing this with the sling is much easier than with him swaddled: The sling makes him less heavy. I only need to support him with one hand, so I can use the other to select songs and play with the volume of the music, and maybe check email while he reaches deep sleep.

But bolliti wouldn’t agree to either alternative. Despite our best attempts to distract him, he fought the sling to death. So, staying awake was not an option. Therefore, I proceeded to make him sleep…

Took him to his room, danced him to “I’m A-Doun For Lack O’Johnnie”, a song that always calms him down and leaves him ready for softer soothing songs. Danced him to two more songs which as expected got him to sleep. The thing with Joaquin, though, is that he’ll trick you into thinking he’s dead sleep when he’s only lightly sleeping. If you attempt to put him down at that point, he’ll wake up in tears within the next five minutes. Guaranteed.

So I knew that I still had five or more songs to go before I could even consider starting to move him to his crib. He was making sucking motions with his mouth, so I suspected he was hungry… By then it had been about two hours since his last feeding, so it was possible. Sure thing, bolliti suddenly woke up screaming, acting hungry like the wolf. I bought it. Took him out of the sling and pulled out the boob.

The little bugger took six minutes at the breast. That is: He wasn’t that hungry. And then, he wouldn’t stay back on the sling. I kept asking him why. I was rocking him exactly as I do when he’s in the swaddle. His position was exactly the same. Movement of arms was restricted. He was as warm. But this bollo is a tough cookie. He knew something was different. The swaddle is blue. This hideous thing is orange. ORANGE! How could anyone fall asleep on an orange thing different than the blue thing on which you’re used to go to sleep?

Mom came into the room to announce that she was cutting us pieces of carrot cake for our afternoon snack. I decided to take the bollo to the kitchen and enjoy my piece of cake. Why not?… Out of the sling, Joaquin acted all happy, promising to be nice and stay calm with us. He was so sweet, that I attempted a risky move… Put him on the swing at 4:45 pm… You see, bolliti loves the swing in the morning, but he won’t take it at any other time. He sniffs when we’re trying to “get rid of him” with the old trick of the swing and won’t give in.

Lovingly, I placed him on the swing… He didn’t protest… I proceeded to fasten his straps… He looked at me but didn’t threaten to break the pout… I covered him with his blanket, tucking the sides under his legs… Not a complaint… Then the thing started moving and BUAHHHHHH!!!!. Mom rushed to the CD player and turned the volume of the heartbeat lullabies way up to match Joaquin’s volume. He hesitated a little but kept crying, until suddenly he noticed mom. “Oh-oh… the sleep lady is here”, he seemed to think.

Mom is “the sleep lady” for Joaquin. She takes him, rocks him, walks him, dances him, does whatever it takes to make him sleep, and the whole time she avoids eye contact and gives him a sleepy face. He knows that when she takes him, there’s no playing coming out of this woman. No. He knows to abide the sleep lady.

So this afternoon, on the swing, he saw her. And man, did he become quiet immediately… He wouldn’t stop looking at her, and by the end of one lullaby he was asleep. We conquered!… We conquered, and were able to have our snack and congratulate each other on winning this battle… Until bolliti woke up 28 minutes later ready for his next feeding… 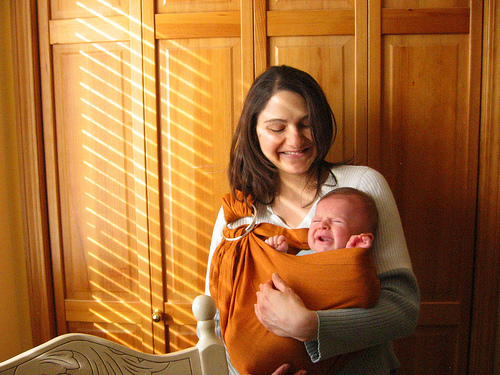