Liquid or solid, but by all means NOW!

This has been going on for a few days now…Towards the end of the day, nursing the bollo becomes almost more stressing than speaking in public. Why, you ask. Well… It so happens that Don Joaquin recently has decided that he no longer has the patience to suck for longer than 3 seconds to get a gush of milk, no sir.

So the feeding begins, milk starts flowing as he vigorously sucks. The first let–down kicks in. Joaquin gets “the gusher”. He enjoys it. He relishes it. Then suddenly it stops. He makes a huh! noise. Sucks a couple of times while he nervously looks around. If he’s in a good mood, he pulls off the breast and smiles at me like mommy, this one’s done. If he’s in a bad mood, he bites the nipple, makes a face like dammit! empty AGAIN!, waits a couple of seconds… no milk dripping to his jeta… pulls off the breast hysterical, yelling and kicking like a verdulera. I gently tell him to suck more and put him on the breast again. The hysterical act replays although my boobs are hugely full of milk. I tell him to suck. He yells. I want to yell back SUCK MAN, SUCK!, but I don’t. Instead, I massage my breasts frantically, switch breasts, squeeze nipples… I sweat, I tremble… for Don Joaquin will kick my butt if these worthless boobs don’t give him what he wants NOW.

Days have gone by, and what started as drama on the last feeding has quickly escalated to the afternoon feedings, and today even to a morning feeding.

Last night during his last feeding, it started happening. Last night, after so much stress (and not a great night sleep), I finally lost my patience, and in one of Joaquin’s tantrums, I lifted my head to the ceiling and said loudly SUCK!, and of course baby immediately gave me the pout and started crying and screaming because he doesn’t like it when people are rude and speak loudly to him. I HURT my baby’s feelings and I wanted to kill myself for it. He cried, and I cried, and asked him to forgive me, and made him smile, and tried to put him back on the breast. But he was traumatized. Every time he got close to the breast of the agravio, he’d start crying like I had just yelled to him. So I cursed my breasts and prepared him a bottle of previously frozen breast milk. Gave him 3oz. He spit up one. I pumped and got two, which made me wonder… Is something wrong with me or is it that he’s just too impatient (and maybe a little greedy)?

I googled the issue. Got back some answers. Turns out this is perfectly normal. As some babies get older, they don’t have the patience to suck for a second or third let–down. They get upset and pull off, and some times, they even go on a nursing strike. Moms feels like crap. We do. The issue becomes a catch 22 as the stress of the hysterical baby makes mom so upset, she can’t relax and let–down the milk.

So this morning it happened again. Joaquin was in a good mood, so he simply pulled off uninterested. I was not going to let this get to me again like last night, so I decided to pull my emergency activity, i.e. feed the baby solids. Baby doesn’t want to take a nap? Feed him solids… Baby’s fussy? Feed him solids!… Baby’s pissed that he’s not getting the gusher? By all means, feed him solids.

Although this is only his third day on solids, Joaquin took two servings of the mush I prepared for him, and he probably could have even gone for a little ñapa. What cracks me up though, is that towards the end of the first mush, he started getting cranky at me. Unlike the first tries, he suddenly started opening his mouth wide enough to take the whole spoon, and increasingly began to grab and pull my hand towards him. Suddenly I realized: HE WANTS THE GUSHER. He has this thing down now, and now he wants this mush to flow fast, just like the milk my boobs refuse to give him in one long steady stream.

Don Joaquin is a little impatient… But thank God, he seems to be a great eater. 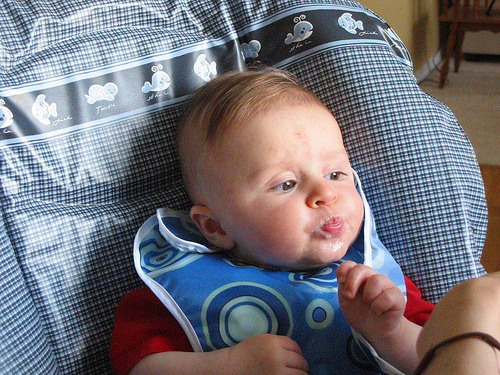