No. Not from the breast… Turns out, Joaquin stopped breastfeeding exactly at the year without any trauma. It happened in the most natural, gradual, perfect way I could’ve possibly planned, except, I didn’t have to plan it and execute it. It just happened, and all three of us involved (Joaquin, me, and my boobs) didn’t suffer at all with the change.

The issue we have now — one I didn’t think I would have to worry too much about — is weaning Joaquin from his swing.

You may remember, napping used to be a bit of a difficulty when Joaquin was two months old. But that eventually changed, and by the time he was nine months old, he had dropped to a single beautiful nap that could last anything between two and THREE glorious hours. This is the nap that began when he was just a few days old, and we started putting him to sleep in a swing while Team Joaquin had lunch. This nap has always remained low maintenance (i.e. minimal human intervention is involved to get him to sleep), and — except for Joey and I — has been the most recurrent thing in his life.

Strangers are often surprised to learn that Joaquin takes a nap in a swing. “He stays on the swing?!”, they ask. And the answer is YES. He stays there, sleeps deliciously for hours, and when he wakes up, he can spend 30 to 60 minutes there, swinging, thinking, meditating, enjoying a calm time, without requesting to be taken out. Of course, I love this swing, and have gone to extreme situations (like ruining your trip, Petie) in order to protect this nap… So, why in the world would I want to wean him from such beautiful habit?

Well, to begin with, I’m a little concerned that the swing may put pressure on the back of Joaquin’s head. As an infant, he developed a little bit of a flat head, which was resolved enough [not to put him on a helmet] as soon as he started rolling to his side and tummy while sleeping. At the time, the cranial specialist told us not to worry about the swing. However, I see the way how Joaquin’s head lies on it, and his skull is not perfectly round yet. So that worries me a little bit. And then, there will be a time when this explosively growing bug won’t fit on that swing anymore. I am afraid that breaking him from the habit then may be worse than now… I mean, 18 month old babies nap on their cribs. The way this is going, as long as Joaquin weighs less than 30lbs, he’ll still be on the swing if he can help it.

So the first time I tried to ruin my own life, I let him fall asleep on the swing, and after 15 minutes or so, attempted a transfer to his crib. This move had worked before. As long as I did it before the 30 min mark, he could be moved and would stay asleep. Not this time, no. The minute I get him off the swing, I see the eye opening. Half sleep, he realizes I’m holding him, so he closes his eyes again… Until I drop him on the crib, and BAM! NO WAY YOU’RE LEAVING ME HERE!!!… I do everything I do when he refuses to sleep at night (pet his head, rub his back, hold his hand, leave him to cry it out, come back, etc), but he is so not going to sleep. So after a long time, I tell him FINE! YOU WIN!, and I put him on his swing. He sits quietly and stays there for as long as I leave him, but will not go to sleep. So the 15 min truncated nap is all the sleep he gets that day until bedtime.

Next time, I replay his whole bedtime routine: I change his diaper, read him stories, put him on his napsack, rock him a little bit, leave him on the crib, and get the hell out. He sees me leaving and I’m silently celebrating because he stays quiet for a little bit, so I assume he’s falling asleep. Suddenly, the crying begins. Just like some times at night, I let him cry it out for 10 min, come to him, comfort him, leave again. He falls asleep and naps for 45 min. This is a bit disappointing short term, but I pick him up hoping that over the next days we’ll work it back to 2-3 hours. Except, the child that wakes up is CRANKY. We’re playing, and he cries like a different baby than Joaquin. Everything upsets him. The minute that he sees the chance, he goes upstairs and heads straight to his swing. I follow him and watch him play with the straps. To me the nap is over, but suddenly Joaquin yells and I understand that he wants me to put him on the swing. So I do, thinking he may nap for the hour he missed. Again, he stays there happily, but no sleep. After 30min I get him out and he is his sweet normal self.

Today I tried the bedtime routine again, but after an hour he still refused to go to sleep on his crib. FINE! YOU WIN!… I put him on the swing and he takes a champion 3.25 hour nap.

Am I stupid or suicidal for trying to wean him from the swing?… I mean, getting him off is totally against my own interests: That nap is my only daily break; I’m truly stabbing myself by doing this…

But what about the possibility of flat head? Odds are, he’ll be bald as an adult. And then, won’t it be harder to break him from the swing in a few months? I’m afraid he may just drop the nap entirely!

What would you do? 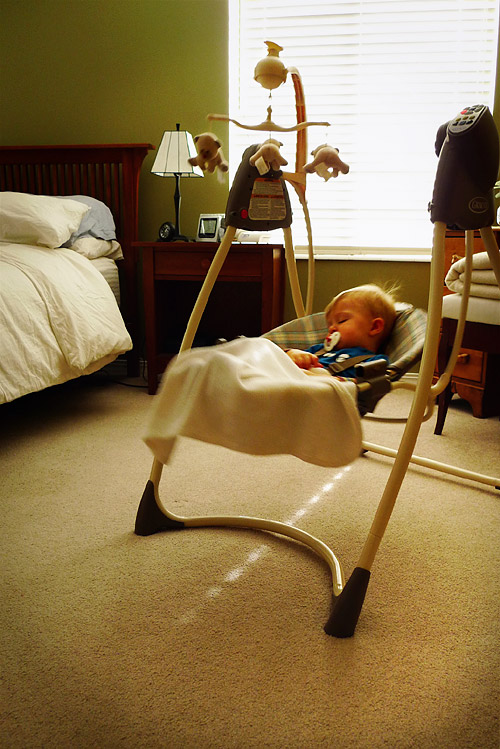