So close to tragedy

It’s been almost two weeks since I was given the names and numbers of five 12–year–old girls who live in the neighborhood and perhaps could babysit Joaquin. Despite a recent horrible day of depression and swearing that I will NOT have a second child, I haven’t called one of those girls yet. Joey asks me why… And what can I say… I’m a new mom. I don’t trust anybody with my baby. This house is not perfectly child–proofed; it’s impossible, and don’t even get me started on that subject. So I’m afraid about all the potential things that could go wrong while I’m not around that a 12–year–old might not anticipate like I do. And you know what? I am right. What just happened an hour ago is evidence that even I, Santa Maria, can’t foresee it all, and my baby could get badly hurt or — God forbid— die, even on my watch.

Joaquin loves closing doors. He’s very little and can’t open them yet, but that doesn’t stop him from closing every single door he can. He’s locked himself in several rooms a lot of times. As soon as two seconds go by, he starts freaking out, so I rescue him by opening the door from outside. He’s locked himself several times in the bathroom. No big deal… I just open the door immediately and get him out.

So today I’m in Joaquin’s room tidying up things after getting him dressed. I hear him wandering out of the room, like always, then getting in the bathroom and closing the door. I head straight there and before I can reach the door I hear the sound of death: Joaquin has just opened a drawer that blocks the door, making it completely impossible for me to open from outside. This is the stupid set up we have: 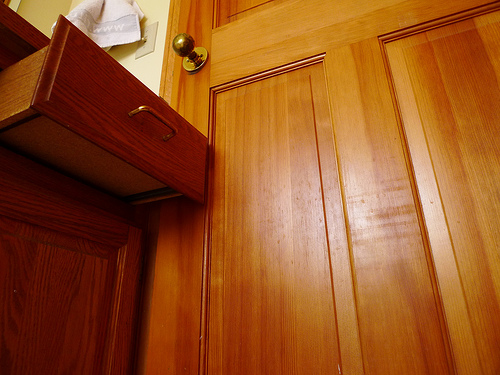 I realize the problem in a milisecond, and as I try to open, the door bumps against the drawer and Joaquin starts to freak out. I see his fingers trying to pull the door towards himself. He’s screaming. I tell him “cierra el cajón” (close the drawer), knowing that it’s very unlikely that he’ll respond to that. So as soon as I see his tiny fingers leaving the door, I close it shut again. I want Joaquin to close the drawer and keep telling him to do this, while in my head I start picturing horrible scenarios…

My brain plays the scenario of how I called 911 and they couldn’t get here fast enough before Joaquin forced open the toilet, reached in, and drowned himself while I couldn’t do anything from the other side of the door.

Then I play the scenario of how a bunch of studs get here and have no clue of how to open the door without hurting my baby. I picture them operating power tools to drill a hole on the door, and cutting my baby who is alone there, scared, and glued to the door. That wouldn’t work. Kicking the door open wouldn’t either. I have no clue how anyone could get in without hurting him. And by the time we figure it out, he’s drowned himself in the toilet.

We do have a toilet lock, but the thing sucks. It never stays put, so many times we don’t even put it. Coincidentally today the lock was there, and it seemed to be working fine. But I know Joaquin. He’s a strong little boy, and he recently discovered toilets and is so interested in opening them. I’m sure that he could force that toilet open without a problem. And several times he’s reached inside the bathtub, and at least one, he fell on it. My heart is beating so fast… I’m in the beginning of a horror movie. The one about the woman in her mid–thirties who is having a hard time adjusting to stay–at–home motherhood, and within the first 5 minutes of the movie loses her baby tragically, and then the rest of the film is about her sorry life afterwards.

I say “cierra el cajón” one more time, and miraculously I hear it! Joaquin pushes the drawer in, and within a second I open the door and get in. OH MY! What if… I thank him and his little angel for helping him do what he needed to do. We go downstairs for his lunch. He throws his cup to the floor the entire time, but unlike Sunday (the hell day), this time I’m just thankful that he’s safe. Doing annoying baby things as usual, yes… But safe, with mommy, who would probably kill herself if she ever lost this precious little boy. 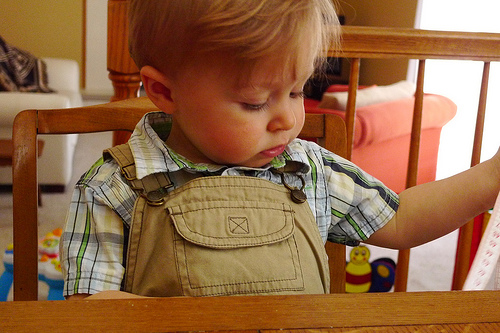