Walks around “our property” (the backyard) like Simba, the Lion King.

Announces poops and pees (and perhaps farts) by becoming very serious and saying popó in a solemn tone to express the gravity of the situation.

Demands more than two choices to select a video to watch. Two?!, he moans and quickly points to the place where all other videos live. When presented with a more reasonable sample (four to all), he picks a few and flips them over to inspect the back covers. Some get discarded right away (he places them carefully on the floor). He takes his time, and finally makes his selection.

Hates with passion the words “wait” or “just a minute”, because despite my best intentions what he seems to hear is “never in a million years”, and he reacts accordingly. It makes me crazy. Somebody should explain to toddlers the physical reaction a mother feels when hearing the hysterical cry of her cub. It perforates a hole in my stomach. I haven’t been able to keep my cool a couple of times and have yelled back one minute!!!, but that doesn’t relieve the pressure on my gut. What works best is to breathe deeply through the minute I’m making him wait.

Loves to count things. Loves to use his fingers to show us numbers. His favorite number is 4. In fact, I suspect that he actually knows how to count as evidenced by the number of times he is right when he says four.

Pretends to talk on the phone with the TV remote control.

Started blowing kisses last weekend. He’s not terribly generous with them, but is more than happy to throw me a few at nap and bed time.

Began saying “Kiki” (my knick–name for him) last Friday. In his tiny mouth, it sounds “Kkeeh-Kkeehhh!”, and he says it very proud of himself, perhaps because of all the kisses and woohoos! he gets from us every time he says it.

Negotiates with me at meal times. It all started because he had this phase during which all he wanted to eat was milk. He’d throw the food at me and sign “milk” furiously. I’d tell him that if he ate “ONE” bite (I’d show him “one” with my index finger) I would give him more milk. This would go for a few outbursts of tears until he finally would take the bite and I’d rush to show him how I was fulfilling my part of the deal. After two or three meals with this kind of communication, one day he surprised me by showing me his “one” tiny chubby index finger after a random bite, like all right, I ate one… milk now!.

Whips me every day with his numerous requests (which quickly escalate to demands if I don’t comply) to read Bob Esponja. Also loves his 123 Usborne book, from which I’m sure he started loving the idea of numbers. 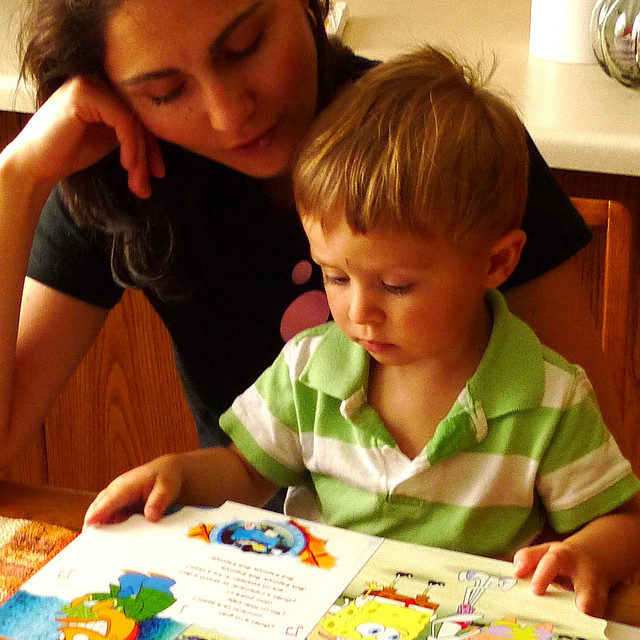 Draws with crayons multiple times during the day and loves to start a blank piece of paper. However, his initial artistic passion has come down a bit to make room for his newfound hobby of counting crayons. One by one, he pulls them out of the container, and lines them up as his fingers show me numbers, which of course I must say out loud for him, or else…

Tolerates his music class, and I may even dare to say that he enjoys it. In fact, by the end of the term I caught him playing peekaboo with his teacher. In contrast, Little Gym instructors never got even close to that kind of acceptance. Could be that he’s older, or maybe he just hates the gym like his mommy ;)

Barely plays with sand or chalk since he discovered the pleasures of handling the garden hose. 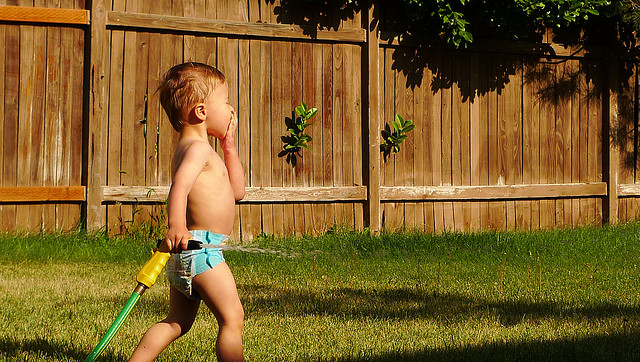 Sniff! Can my bollito get any older?…