To give you a sense of what goes on in the Romper Room (our Son-Rise playroom), I’ll share a few moments from a Son-Rise session Joaquin and I had this week.

In the previous days we had spent a lot of time around the blackboard and a piece of paper, writing down numbers he would dictate to me. He’ll give me a piece of chalk or a crayon and say a number, very often avoiding eye contact. The activity is an ism because, although it is not exclusive, it is repetitive and inflexible. It’s progress, because it involves me. So rather than imitating (which is what I’d do if he was tuning me out), my way of joining him is playing the small part he wants me to play with energy excitement and enthusiasm until a time when he gives me a “green light”, meaning a moment where it feels like he’s open to something new out of his ism. At that point, I’ll try to add a little variation to the activity by introducing something related to it but a tiny bit different. 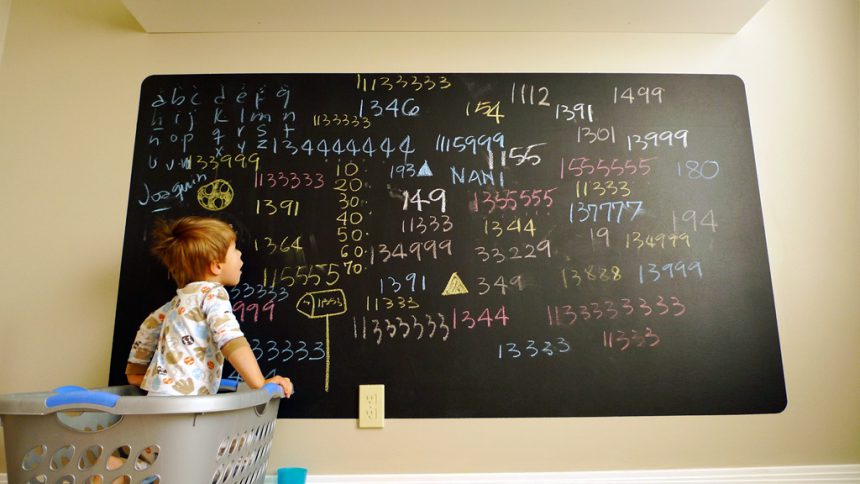 So I had spent about three fun days doing this with him, and during those days I really enjoyed it while my heart was full of love and awe for this strange tiny creature who adores numbers this much. My attitude must have been just right because I felt great, and every morning Joaquin could not wait to get us in the room to play. But on the fourth day I felt like I needed a change of pace… I had started preparing a game many days earlier, and that night decided to finish it and introduce it next day.

The goal of the game —originally introduced by ATCA in the Son-Rise blog— is to help a child move from speaking in single words to sentences by motivating the use of 2-3 words. So beginning with your child’s motivation in mind, you prepare several options of a single thing and present them to him. Numbers being Joaquin’s biggest passion, I crafted five options for each number using different shapes, sizes, colors, and patterns. Joaquin knows the colors, shapes, and the words “big” and “small”, and I thought it would be fun to introduce some new concepts. Most likely, he’d ask for a number, so my job was to encourage him to clarify his request with one more word. 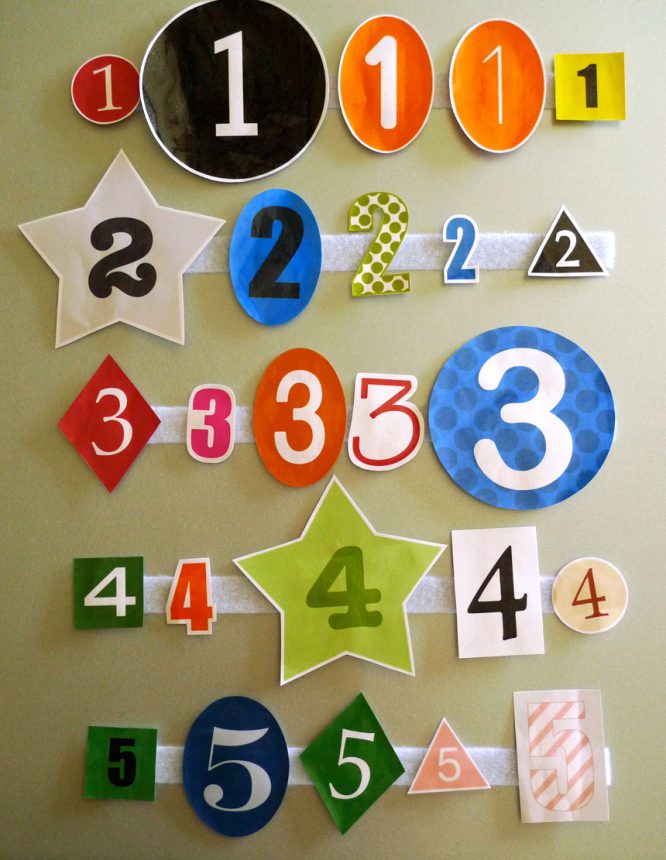 Here’s a video of us playing the game for the second time. Notice that his first request is great: Three! Big circle!. He had learned something… The first time we played the game he was very frustrated by not getting his pieces as soon as he simply said the corresponding number word. So initially I played it a little easier for him by letting him have them as soon as he said a second word, just to get him to understand the idea. On this second time we played, I started getting a little tougher eventually insisting on a two-word request before giving him the piece. This pushed him to the point of using crying to get me to cooperate, and while I could tell he was challenged by my requests, his motivation to get the numbers was strong enough for him to choose to stretch himself in this area.

When children cry and whine to get what they want, the usual adult response is to run and please them so the tantrum stops. This simply reinforces the idea that crying and whining are very effective ways of communication. So in Son-Rise, we attempt to communicate the opposite message by granting things very fast and enthusiastically when language is used as a request, and becoming slow and a little dumb when crying is the main way of communication.

We don’t want to ignore crying because our children are making an effort to communicate even through this less desired way, so we want to acknowledge any way of communication by always being loving and helpful; we just become a little slow, so in the end they understand that they get things much faster when they use words. Moments like these are not easy for me; witnessing his desperation while stopping myself from helping him immediately is a little taxing. Here’s one of those moments:

When children are motivated and interacting, it’s the time to invite them to grow. So far, I’ve done very little of this — perhaps because Joaquin’s interactive attention span is short; perhaps because sometimes I don’t know what to do. But during this game I came up with a completely unplanned idea that not only changed the game a little bit (good to keep it going and to encourage flexibility), but also gave me a chance to request something new from him.

This is a way how Joaquin’s autism is evident: Most of the time, he does not respond to requests. “Give me your cup so I can pour more juice for you” or things like that go completely ignored. So during this game, by his request, I started singing a song he adores… One elephant was swinging on a spider web… Because he knew the web was strong, he brought in another elephant. And you sing this with an increasing number of elephants every time.

He likes this song because I do a little anticipation and physical play with it. Lately I also pause to give him a chance to prompt me to give him the next verse. So when I switched to “two” in the song, I picked a two from Joaquin’s board, and the next time I playfully asked him to give me a three in order to sing the third elephant in. To my complete surprise Joaquin did it. And then, he did it again for the fourth elephant. This, sweet people, is what I call a tiny miracle. And tiny miracle by tiny miracle is how these precious children start to cross the bridge into “our world”.

In this video you also get treated to my rendition of the Romper Room song; a variation of “Rock around the Clock”, which has become a way to express our enthusiasm for being in the Son-Rise playroom, and Joaquin joins and prompts it by singing “rocka rocka rocka”.

I’ve explained isms in an earlier post… And Joaquin isms a lot. He moves between isming and interacting, and I move back and forth with him. Here’s a moment when he became exclusive during the game and I joined him. Many times I’ve joined by imitating his exact actions while keeping an inner sense of love and acceptance for him and his activity. I’ve found that it is more fun, and it tends to shorten the length of the ism, when I go overboard trying to get into it and animate my face and words. In this specific one, he requests that I don’t join his “fx” sound. So I comply and express my delight for the ism with exaggerated facial expressions. At some point he starts talking to himself about eating turkey (our lunch that day), and I follow the topic while I ism, but pretty quickly I realize we’re approaching a “green light” as he takes pieces from me and repeats my words.

Taking care of himself

One more tiny tantrum that both of us weather, after which he retreats to his little island and comforts himself by indulging on some isming. I join him and celebrate all the little snippets of interaction he gives me, though he remains exclusive. It’s okay, little one… Mama is here with you…

Here, he’s done with our new game and motions to start playing our old one (the one were he dictates numbers to me). He knows the drill (and so do I)… open box!… green paper! (I’ve asked him lately which one he’d rather use)… 163… The day before this (or perhaps this day — I forgot), I started testing his level of interaction/flexibility during this activity by requesting him to draw something for me. So I ask him to draw some dots. I’ve been surprised to see him pausing his dictating mode to comply with my request. This is huge, so I CELEBRATE him.

I like this short one a lot. We’re on that weird state half isming, half interacting… We’re doing something repetitive initiated by him, but he’s found his way on my lap, which is considered a bit of a potential green light. In those cases, I stay joining and try to check his level of openness by doing something subtle out of the ism. Here I get a cute little smile and a tender moment, before he feels ready to ask me to watch one more video. HA!!!!… I try to replace the word “no” by positive language. So instead of “no”, I’ll say “Yes!… later”, or “tomorrow”. Enough videos today little one!

Building the bridge between our worlds

So those were some real moments from where we are today. I hope you enjoyed our little dance on this constant flowing between Joaquin’s world and the one where we’re encouraging him to participate. I leave you with one last video that shows “the dance” at work.

As you can see, doing this every day requires a lot of energy. I currently do it for 2 hours every day, or more if he gets us in the room for extra play time. When you add this intense focused therapy to the activities of a stay-at-home mom, plus the special diet I just started for him that forces me to cook and bake a lot of common staples you’d just buy at the grocery store… You may understand why volunteers are a big element of this program. In order to give him more therapy hours, we need help from others to come and play with him, and show him the diversity of people. So that’s our next step in this journey. I need to recruit, train, and bring new Son-Rise friends for my Kiki, and then observe them, give them feedback, set up goals for all of us, and manage all of our efforts as a team.

We recently installed observation cameras in the romper room; we’re just missing a few last details. But very soon, I’ll make my call for local volunteers. We’re hoping that this place where we casually find ourselves right now, will provide an array of kind and gentle individuals wanting to experience the miracle of helping a beautiful special child reach out and connect. It is so overwhelmingly beautiful when you go in there full of love and awe for this majestic, strange and elusive bird, and you see him eventually fly to feed from your hand. You don’t need to be related to Joaquin by blood to experience this, or the joy that fills your day afterwards and goes with you all the way to bedtime.