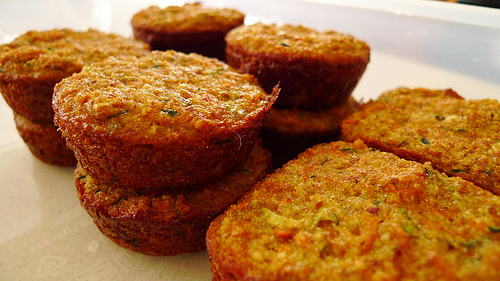 I make muffins as a recurring lunch staple to give Joaquin vegetables that he still has not decided to like. In the current stable version of my recipe, I put carrot and zucchini. I like the flavor and texture, though they don’t rise as much as I’d like. This weekend, however, I decided to experiment…

I wanted to replace a lot of the nut flour for more veggies, and golden beets with butternut squash made them so yummy. However, the crazy improvised recipe resulted in muffins that elevated but ended up deflating before pulling them out of the oven. After 30 minutes of baking (no muffin of mine is ever ready in 20 mins), I checked them and found them dense and moist — giving the impression of undercooked. But this has happened before, and I know that baking them more will not make them firmer, only burned in the outside. Still, I think I gave them an extra 10 minutes. 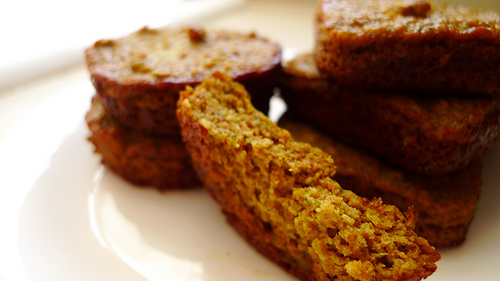 I really love the resulting flavor, and specially like that they include more veggies and less nuts. Joaquin already has a lot of nuts in this diet, and I’m trying to find ways to replace some of them for other foods that provide a different nutritional profile.

I suspect my problem may relate to one or many of the following:

With this post, I’m calling on all of those who know more than me to help me make this recipe work and rise at least a bit. The catch is, we’re following the Specific Carbohydrate Diet which eliminates all carbohydrates except for those in fruit, vegetables, nuts and honey. Therefore, this recipe has some limitations:

Having thrown that bomb to “typical” bakers, I’ll add… I want to preserve this flavor. I want more veggies than nuts if possible. I want it to have enough sweetness so a three-year-old eats it, but not too much because sugar is one of those things autistic kids should have less of. I really would love any tips you have on fixing my ratios, ingredients, the mixing process, or on any other variables that may be at work here.

So without further ado, this is what I did…

How I mixed this

Ground all nuts and coconut in food processor until some butter started developing. I have never been able to get nut butter in my food processor with my soaked nuts (don’t know why), even if I let them process for ridiculous time spans like a full hour. So now, instead of waiting that long, I go to the point where I know not much else will happen, and I add one tbsp of coconut oil. That’s not enough to get butter either, yet that’s what I do most times when I don’t really need nut butter but I still like grinding nuts to the max within a reasonable time.

To the nuts and coconut oil, I added the dates and let them process enough until they looked like they blended very well in the mix. So the whole think looked like a brown clumpy buttery flour sort of thing. I reserved this in a bowl. 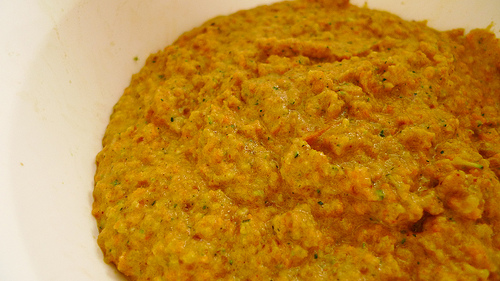 In the food processor, pulsed the butternut squash and added an egg (originally was going to go for only two). Processed lightly and added this to the rest of the batter. Stirred it all and added the orange juice at the end. 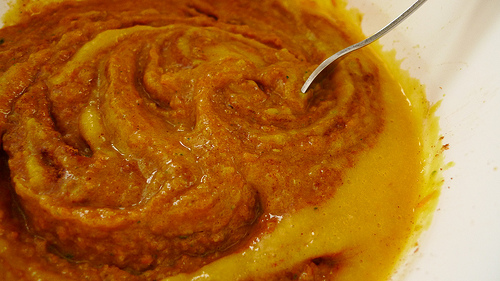 Immediately loaded batter in previously greased muffin trays (coconut oil on bottom and sides — no liners) and baked them in a preheated oven at 350°F for 30 minutes.

This recipe is very much the same as the one I use for my carrot cake, except in that one I use honey instead of dates, and there’s 1.5 cups of nut flour to 1.5 cups of carrots, whereas in these muffins, I was trying to replace 1 cup of the nuts with squash and beets.

So what do you think?…