Recently, we had the opportunity to meet and play with Aaron DeLand, who worked as a Son-Rise Child Facilitator at ATCA for five years, and then founded Connecting with Autism in 2007 to teach parents how to play with their children to develop social communication. 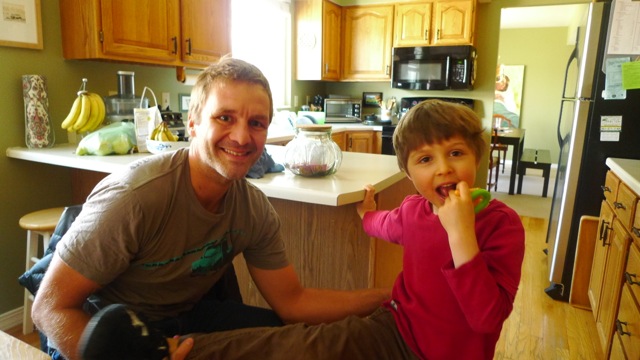 Through his experience, Aaron has developed a unique perspective into how to effectively help children develop socially. He plays and bonds with children in the same way how Son-Rise does; with an attitude of love, delight, and acceptance, and an emphasis for creating a connection by following the child where his motivation is, being fun, animated, present, giving control, being easy to digest and exciting to play with, joining and allowing space for exclusive behaviors.

However, he differs from Son-Rise in the way how he inspires children to stretch: Rather than directly requesting a child to perform actions in response to him, Aaron prefers to minimize requests, and instead provide plenty of opportunities and space for the child to practice new skills by initiating with his own spontaneous action.

The vast majority of interactions between adults and children on the spectrum are request-based interactions. Meaning, the adult asks a question, gives the child a task, gives a prompt, etc. This style of interaction gives a child practice at being a responder and very little if any practice being an initiator. […] Responding and initiating are two different circuits in the brain. Children need to develop both, they need to respond to teachers, parents and peers, but they also need to understand how to initiate social communication.

For a child with autism, responding is generally over practiced. This can result in children becoming prompt dependent (i.e. they wait for the request or prompt before acting). If they do initiate it’s generally to get food, a toy, or some other thing they need your help with. What I am talking about is initiating for social enjoyment. Initiating with another person because they want to interact with them. When you create opportunity and allow a child to initiate interaction they become far more proactive in their social environment. They use the skills they have, not because they are being asked to, but because they are motivated and see the value in doing so.

Having learned the essentials of the Anat Baniel Method in Kids Beyond Limits, and having seen the power of movement with attention in awakening Joaquin’s brain to many kinds of developments, this approach makes a lot of sense to me. And although Joaquin has grown very spontaneous interacting and socializing, I am convinced that Aaron’s approach is a more powerful way of learning the skills he’s missing right now.

Compare what’s involved in responding to somebody’s direction to “do X” versus providing the opportunity and allowing the space for you to:

The latter is a way more involved experience, very likely to engage your brain turning it on to perceive new pieces of data and create many new neural connections, giving it exactly what it needs to do its magic, mapping and developing the skill naturally and at quantum speed (such has been my experience since starting to work with ABM essentials).

Another concept that comes to mind is Anat’s explanation that our brain learns from our experience of success or failure. When we ask Joaquin directly to do something that is challenging or very unfamiliar to him and he doesn’t do it, or he does it incorrectly, it is possible that his brain perceives failure, mapping failure around the skill we’re trying to teach him.

In contrast, if we model the skill over and over while in a motivating interaction, and we provide opportunities where he might choose to do it, there will be no tests to fail, and in the flow of natural play he will be more motivated to spontaneously stretch himself in new areas of development without feeling challenged. Think of the little girl walking for the first time without realizing it because she was focused on blowing a tissue to reach Anat.

So as a tweak in our direction helping Joaquin grow, I want us all to become acutely aware of all the ways how we request from him, and as much as possible re-stage these requests as opportunities for him to act spontaneously. This doesn’t mean that we can’t ever ask him to do something, like “come to the mirror with me”. I just want us to notice ourselves more, and direct him less, giving him more opportunities to use his own awareness and choose action from within, especially when it comes to social skills he hasn’t learned fully yet (e.g. creating symbolic gestures).

Do you want me to get you paper?… Yes?… What color?… Is this half sheet okay?

Don’t anticipate Joaquin’s needs. And if he asks you for something and you have enough information, act without trying to clarify his needs through questions. This will give him an opportunity to redirect you constructing his own context-rich sentences, and perhaps realize that he needs to give you more precise information next time.

Should we go knock that door?

If you have an idea within the flow of the interaction, don’t ask Joaquin for his permission. Go for it giving him the opportunity to be exposed to something he may say no to (if asked), or use his own skills to stop you or redirect you towards what he wants.

I train a lot of people to work with their children, and one of the most common things I see is what I call “transactional” interactions. Basically, I’ll give you “X” when you do “Y”. The main problem with this model is that you’re often times not teaching your child to learn a skill for the right reasons. In other words, I don’t want my child to look at me because I’m not going to give them something if they don’t; I want them to look at me because they think I’m funny, interesting and exciting to watch.

Watch Aaron playing with Joaquin, building his motivation and modeling symbolic gestures playfully throughout their game, creating opportunities for Joaquin to spontaneously imitate him or perform his own gestures.

In this first video, Joaquin performs two spontaneous symbolic gestures (“power scrubbing” the spaceship windshield, and “around” moving his index finger like a circle). The power scrub is also an imitation, and although his movement is not exact (he hits rapidly as opposed to wiping), it is his own, and he accompanies it with the sound effect of the spray bottle.

In the next game Joaquin’s motivation was also really high. He was obsessed with using the air pump and counting the number of pumps, and Aaron weaved the gestures playfully into this motivation, creating a fun popping event that cracked Joaquin up and he wanted to replicate many times. In this context, Joaquin spontaneously imitates Aaron’s way of fixing the seat, and putting on a spaceship suit and helmet. He also creates his own symbolic action for “floating away”, the second motivation in this interaction.

In addition to creating playful opportunities for Joaquin to practice a skill, we also need to leave space for him to do it. For instance…

Previous to this moment, Joaquin and I had been pretending to consume different types of crazy medicine to cure our cold. Joaquin was very motivated to gulp more than what the medicine indicated was safe, enjoying his own mischief and my responses to him. Earlier, I had pretended that he had vomited by performing symbolic gestures on his body. And now he wanted to recreate the situation. I set up the opportunity and made a long pause giving him a chance to… who knows what he might do… As time went by, he started opening his mouth, but it had been a long pause, and seemed like that’s all he was going for, so I closed the pause and kept playing. I bet he’ll “vomit” on his own next time :)