Movement with attention is the first essential of the Anat Baniel Method; one way how we can help our brain awaken to perceive subtle differences and organize new abilities.

When you pay attention to your own experience—what you are feeling—while you move, your brain creates new neural connections at an incredibly rapid rate (1.8 billion per second for a young child’s brain). What’s most exciting: The brain can use the connections it created through one activity in infinite—sometimes unpredictable—ways to develop other skills.

Using this essential to help Joaquin grow is not about getting him to pay attention to us, but rather about finding ways to help him notice and follow his sensations and feelings as he moves himself or is moved by us; “attentioning”. Movement can be physical (movement of the body), mental (movement of thoughts), or emotional (movement of emotions), and body thoughts and emotions are connected.

Here are some examples of ways how I have helped Joaquin to do attention while moving. From every one of them, I have observed at least one significant and immediate change in his development.

Not until very recently, Joaquin always wanted me or Joey to be in the bathroom with him while he was pooping. “Tied” to the toilet, without any distractions, and so close to me, these used to be very quiet and connected times during which I felt we had very deep interactions.

One time last fall, when Joaquin was at the toilet, and during a time when my attention was very interested on his lack of sustained eye contact, I started a conversation with him. I told him very lovingly about how when he listened to me, he usually looked at my eyes for one second and then he’d look away, and I mentioned that I wondered why that was. I showed him you look at me… (looking at him) …and then you look away (looking to the side) and then you look at me… (looking at his eyes again) … and you look away (looking to the side). I did it just like Joaquin used to do it, and I did it several times; we were so close from each other, and he was totally into it because it sounded almost like a song. He had an expression of full interest and I even thought that he was learning for the first time about this. His face looked surprised, like he had no clue that he did this.

He was so aware… so with me… so interested. And I asked him if he’d like to try looking at me a little longer. He said yes. We looked at each other, and I silently counted six seconds all filled with amazement and inner celebration of how beautiful this was to me, and when he looked down I told him sweetly you looked away. So his eyes returned to me, and in my mind I counted six more seconds and told him you looked away when he looked to the side. This time, however, he replied I didn’t look away! coming back to me with resolve. I was so full of love for these eyes, and when I was able to count THIRTEEN straight seconds I saw his pupils dilate, and I swear I thought that the Universe was going to reveal itself to me. I had that feeling of OH MY GOD, something amazing is happening!. It was the most beautiful experience, and the longest I had ever seen Joaquin look at me. So open, so willing, so AWARE.

I believe that the naturality which which Joaquin sustains eye contact now (and a few days after that) while interacting with us fed from this moment of awareness.

Attentioning while in a communication breakdown

Clarity of verbal communication was a goal of our program for a very long time. Joaquin kept moving towards it, but while his language got more sophisticated, the need to clarify the content of what he meant (or didn’t say) was often there. At that time, this was the biggest source of unhappiness for the little guy. Every time he said something lacking context or enough information and I looked or responded confused, he would cry and yell.

So one day that we were interacting happily and the situation was not there, thinking of his great motivation for maps and streets, I had a great idea!

I told him that I wanted to make a special map with him about the situation when he told me something and I didn’t fully understood him, and he got upset about it, and we spent some time trying to calm him down but I still didn’t know what he wanted. So I told him, you start at this place ‘Not Understood’… and you want to go to ‘Understood’, and see what happens…

And I started drawing all his favorite streets in this journey (Frustration Road, Anger Boulevard, Wet Tears Highway, etc). I told him that he went so fast to those, and they didn’t lead him to being “Understood”. I showed him how those avenues took him away from his desired destination. And then I told him that there were other roads that lead to “Understood”, and even if he got on Frustration Road he could always take a detour (he loved detours at the time) and get to “Giving More Information Road” or “Talking More about the ___” to give people what would be most useful for us to understand him. By now Joaquin was very involved in making this map, and when I went to label the first effective street, he told me NOT Giving More INFORMATION!… Putting his own piece in it, he called the roads “Giving More MULCH” and “Talking More About the MULCH Road”. He enjoyed making this map. 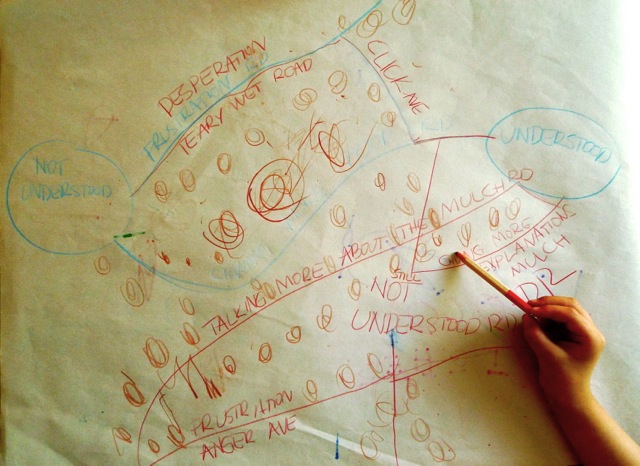 Then a few days (or hours?) later, when the challenging situation arose, as soon as Joaquin started crying over my apparent confusion at his comment or question, I said Oh! There you went on Frustration Road. Joaquin immediately stopped and protested I’m not going on Frustration Road!, I playfully teased him Yeah you are; I saw you driving fast getting on it, to which he laughed while wiping his tears. It took maybe one more little tantrum to remind him in his moment of frustration of this map (a metaphor for what he was doing) and I immediately saw his tolerance in this situation rise, and at times of not being fully understood spontaneously start clarifying with bits of additional information. By February this year, we have all noticed the amazing clarity of his requests and statements.

Attentioning while feeling an emotion

One morning in early February, something happened during breakfast and Joaquin started crying sentimentally. This was not a tantrum; not the tears and yelling he does sometimes when he gets upset over not getting what he wants. It was cute and quiet little tears and a pouty lower lip. I saw this and immediately ran to him lovingly and told him Oh no! That lip! Joaquin… You are SAD!, and I imitated his facial expression for him. Through the tears, he immediately laughed, and excitedly repeated I’m sad! pressing with his fingers on his lower lip, to replicate the pout… I had gotten his attention and he clearly loved this discovery.

At the time I thought that perhaps this awareness would help him put together the emotion with the pout (the specific thing that made this facial expression mean “sad”). I wasn’t wrong; days later he spontaneously started acting out “sad” and “hurt” for the first time. He had never pretended to have an emotion that was not the one he was truly feeling at the time. Since around this time I have also noticed that he has become increasingly interested in facial expressions; I think his brain as awakened to perceiving differences in this area.