01. A mural for animation

With the filmmaking and animation motivations still alive, I offered Joaquin the idea to draw a long strip of landscape we could scroll in order to create the illusion of movement in a train. He got passionately into it, and surprisingly traded his beloved hour of computer time to draw. The payoff to two days of hard drawing work was a short pretend ride across six train stations. 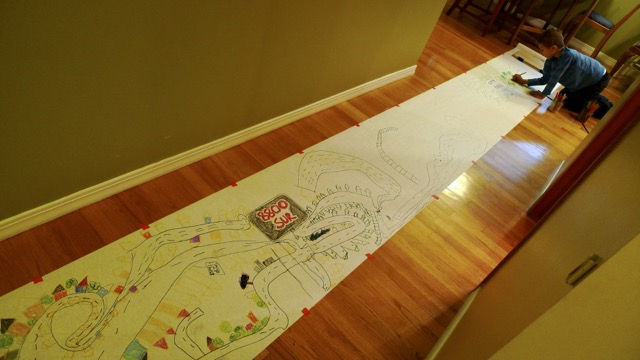 After filming Leon, Kiki wanted to make an animated movie. To introduce him to the concept of animation (and the big effort and patience it entails), I showed him how to do a short sequence with stop animation. He immediately wanted to make his own, and I helped him with some ideas. We shot the images with PhotoBooth, and he edited the finished video with iMovie. I LOVE his voiceovers!

After a couple of stop animation projects (and the mural), he’s fully aware of the kind of effort required to do 2D animation and has changed his mind about that movie he was planning to animate :)

Two months ago, as our diet relaxed from SCD to GFSF, I started making gluten-free pizza. Joaquin loves his pizza, and last week decided to learn how to make it by volunteering to help me; I did the dough and the chopping, and he put his pizza toppings.

Today he wanted to do it again, and he wanted more action, so I let him have the full experience allowing him for the first time to use a real knife to chop vegetables with supervision. He was thrilled and even got to experience his first onion tears (not so thrilled about those, though). I shot a video as we worked together, and he used his iMovie editing skills to create a tutorial for our recipe.

Mr. Helper has requested additional chores, and upon learning that one of mine as a child was folding clothes, he’s declared himself Exclusive Cloth Folding Baron at the Household, insisting on folding any of my shirts he finds unfolded. Look at that care and perfectionism… I love him!

Joaquin’s new project is a book of experimental desserts. When I saw the amount of oregano he poured in his measuring cup today I warned him I wasn’t tasting this one. But how could I refuse a pair of shiny brown eyes that spoon–in–hand offered me “just a little taste”. And then, he washed dishes. 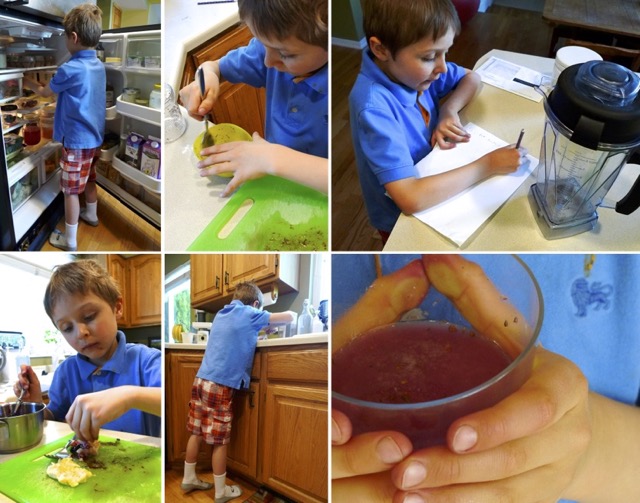