Out in Deep Water

Water.
Interacting physically with a stranger.
Learning a new physical skill.
In a pool.

Months ago he had asked for this… Lots of excitement and anticipation! 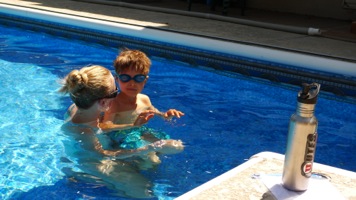 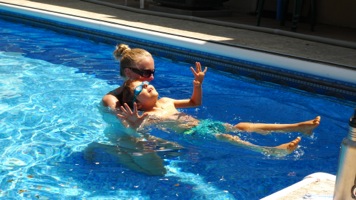 About seven minutes into the lesson, the instructor took Joaquin to a deeper part of the pool. He still could touch the bottom, but the idea of “deeper” was freaking him out. He yelled and cried, and begged her to please come back to the shallower part. She thought this place was better for floating exercises, and kept telling him why they were there and what she wanted.

Watching the interaction, I started getting a little afraid that the experience of terror could break this deal for him and kill his interest to learn how to swim. Kiki cried in fear my body hurts!, and I felt it rising in me… I thought maybe she could chill a bit and give him a little control. Our plan signing him up for swimming lessons was to give him a stress-free experience in the water, something new for his brain to perceive, something new to learn; not something to hate.

So I called her name, but either she didn’t hear me or she ignored me. I was about to use the autism card —which I haven’t for swimming lessons. I wouldn’t label him, but I was going to ask her to go a different way than she knew. I’m glad that it didn’t happen…

Joaquin and his instructor kept talking and negotiating. The ability to communicate is so important. He was able to tell her to move away a bit from where they were (and she did). He was able to listen to her explanations, to ask her questions… He even asked her at some point show me!, so he could see what she wanted from him. It was after seeing it, and having the promise of an end —one real float and you’re done, that he went for it though still hanging on to her neck.

It was supposed to be three seconds. He attempted to count to free himself from the torture: One, two… —No, she said, You need to let go of me. So he opened his arms, let go of her, his head floating in the water with ears under. One… two… three… He seemed relaxed. I saw him triumph. I thought, not a special kid… just a little kid like so many others (me included) scared on his first swimming lesson.

When he stood up out of the water I cheered and told him he had nailed it. He felt proud. I asked him how this was… Good! he said. The stretch didn’t break him; he didn’t go to the Zingaron Place. And I thought… All of this stuff we’re doing right now is so out of the greenhouse bubble where we’ve lived for four years. It’s scary coming out. And he’s proving that he’s ready. It is thrilling!… Let our new life begin!