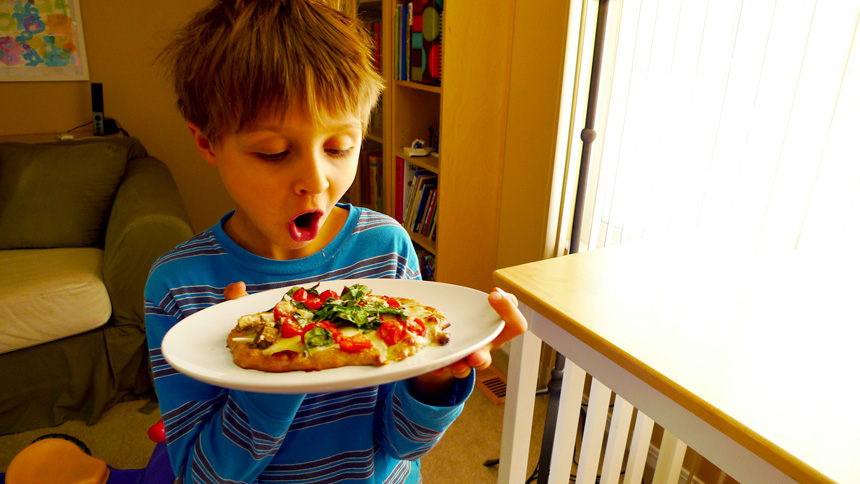 Two weeks ago, Joaquin decided that he wants to be the chef of our home; he wants to make his own lunch, his own way.

I decided to support his independence with some structure:

The first time, I charged him for everything he used ($7.30 for the privilege to make his own pasta-less lasagna). He created a dough with flax seeds, coconut flour, and egg. He included avocado (that got cooked) and chopped large chunks of vegetables. He ate his final product happily but didn’t like how his rogue dough turned out. So that piece went to the trash (about $1 in ingredients).

Noticing that for the most part he ate his lunch, I told him that since I already feed him for free, I will only charge him for the wasted ingredients in his rogue recipes. So right now he has an account with Mama Bank with a balance of about $6. He got a kick out of that, and I love that he’s starting to see in a practical way how money works (he used to see credit and ATM cards like magic money; now he’s seeing where the money comes from). 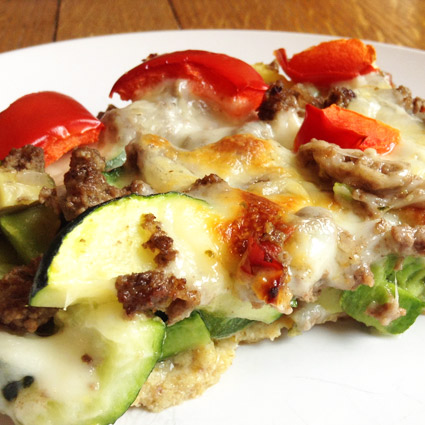 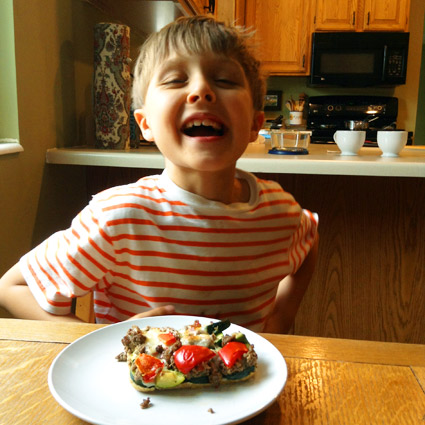 This week’s pizza cost him only a few cents, as he loved everything (and taught me a new way to make the dough), but discovered that he didn’t like his cooked tomatoes and did not want to eat them.

Through this exercise, I’m enjoying the opportunity to teach him the value of things and the cost of independence… The consequence of doing things his own way (sometimes rejecting input from others): On one hand, it’s fabulous! You get to discover things, learn through your experience, find better ways, have control, and use your creativity. On the other hand your experiments also have a cost YOU need to incur, and you may not always reach your own measure of success.

Joaquin is extremely independent and has always wanted to do and learn things his own way. I want to support him; want him to grow empowered, creative, confident in his abilities, fearless to follow his dreams. And I also want to teach him that independence and “going rogue” (an identity he values) require certain resources, there is a cost, and he needs to provide for it.

I’m loving it. Right now he’s creating a pretend situation where he has a job managed by four different bosses (all his invention). He knows these bosses give him instructions he needs to follow if he wants to earn a salary. He is seeing how he needs money to pay for the privilege to make lunch his way. He’s starting to get these things about how the world works in some way. It’s important to me, because following directions, allowing himself to be directed, giving control, taking a role in a team without going rogue has come up as a challenge he’s not fully mastered; something that is currently on our way to pursue certain opportunities for him. It has already created a consequence (i.e. his piano teacher has chosen not to teach him any more unless Joaquin embraces fully his authority). Without cutting his wings and teaching him to comply blindly motivated by fear, I want him to learn the value of being a team player and giving control for the benefit of the greater good, and ultimately his own benefit.

Similar to every social skill he’s learned through Son-Rise (eye contact, language, non-verbal communication, imitation, etc), I want Joaquin to learn to give control because it makes sense to him, because he sees the value in it. Not because I offered prizes, punishments, and trained him to learn a vague rule he won’t be able to translate to all situations because he doesn’t get it; because all he gets is that people want it from him (for their own reasons), and this knowledge might not always result in the behaviors that would come from the value we want to teach.

I suspect a few people would rather I squash his independence and move him to comply just because. They may be right. It may have seemed to work in a lot of kids. But I’m daring to do it a little different, aware of the fact that I could be wrong and he could end up not learning to ever be a team player, a student, an employee, a participant of a community. I am choosing to see every gain he’s made in the last four years as evidence that my method might work out over time in a way that is more enduring and useful to him in the long run. Right now this feels right. I feel enthusiastic about going for it and allowing myself to evaluate and correct the course along the way. I guess I am a rogue parent and educator too.