After eight lessons of formal instruction—or, as formal as it could be with this child—Joaquin is now teaching himself how to swim. During his lessons we were fortunate to have Nanette, his most recurring instructor. As soon as she learned from me about Joaquin’s learning process and sensory sensitivities (I didn’t want his challenge to be so great that he’d turn off interest in the activity), she showered him with a lovely attitude that allowed him to have exactly what I was looking for with this experience: Flexibility in her approach, full detachment from the outcome of him learning what she normally teaches, and the ability for him to explore freely and lead his learning process.

The gains from this were an increased comfort in the water, and his emerging desire to move and swim independently. By the end of their time together, Joaquin was “swimming” away from Nanette and was less concerned about the distance between him and deeper parts of the pool. 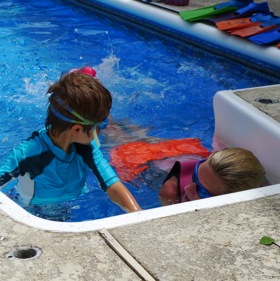 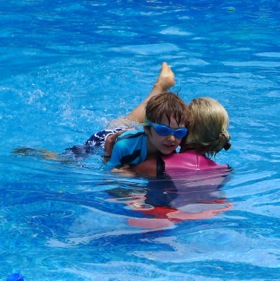 Since then, we’ve been going to the pool twice a week and I have not attempted to instruct him much. Every once in a while I’ll show him a fun move, or dare him to do something (just like I would if I was a kid playing in the pool with him).

From all these “not learning” experiences, I’ve seen him gain even more confidence, initiate new challenges on his own (like putting his ears in the water), take himself to depths where the water reaches his mouth, practice jumping into the water (in a way that his head will not go under), develop his own swimming style (a short-distance kick inspired by the pedaling movement), and day after day do little things to organize, refine, and expand his movements in the water. He’s also watching with interest people playing, swimming, splashing, and sliding.

Our outdoor pool has closed for the year, but while his motivation is alive we’ll keep going with this experience, which to me is not only about the skill of swimming, but most importantly: The perception of subtle differences.

This is where he is today: