Opening up to children

The bowling alley is our new second home. A place where I meet and talk with older adults (and how cool these senior bowlers are!). The place where Joaquin is learning to interact with kids through his Off Track Kids Club bowling class.

This is Joaquin’s new group. The last one had three kids in it; this one has eleven. ELEVEN! 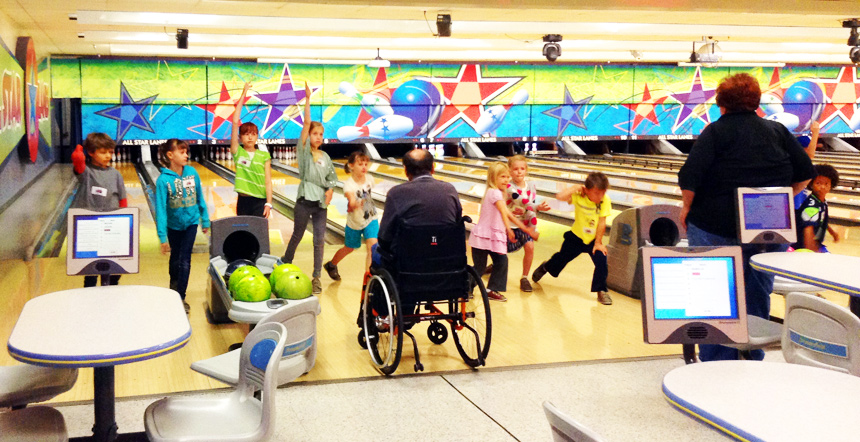 I’m the only mom who watches it. A couple times I have gotten Kiki’s approval to visit stores within walking distance for a few minutes while he’s in class. But he wants me in class. He wants me to watch him. And I want to be there because this is a small way how I can be involved in his bowling passion (since Joey’s the one taking him to bowl on weekends).

I adore Joaquin’s coach, Merle (and her new assistant coach, Ronnie). I watch the interactions that take place in every class and I’m so grateful for their acceptance, flexibility, easy coaching, and for the experience they give us.

And the kids… They’re such great stimulus for me… My 42-year-old social conditioning quickly perceives how much Joaquin sticks out in this group. So in order to survive and turn to peace, I reframe my observations…

Joaquin is pure authenticity, freely expressing likes and dislikes for the different people that interact with him. If he doesn’t like you, he tells you right away. He hasn’t learned to lie and act like he accepts you while secretly talking behind your back or asking adults not to put him to play with you. If he likes you (because you have the coolest afro he’s ever seen), he cheers for you on that crucial roll, “Don’t lose, Jackman!” and tells your competitor he doesn’t want him to win over you.

Joaquin expresses the full depth of his passion. He doesn’t keep himself or his emotions small like most girls I’ve watched. If he rolls a strike, he CELEBRATES IT!… If he’s had three gutters in a row, his tears and jerky angry moves show his frustration.

Joaquin claims his rights and expresses his boundaries. He has no problem asking to go first or second on his table’s queue to bowl. And when a girl was about to use his ball (he’s so serious with this, he recently got his own bowling ball), he had no social filter to express his disapproval, take the ball from her hands, and announce it to a few more people that THIS WAS HIS OWN BALL AND DON’T YOU PLAY WITH IT!

Joaquin enthusiastically participates and shares his knowledge and opinions. He hasn’t learned to raise his hand when the coach asks a question. He has no problem yelling across the room “Don’t call it a hambone; call it a peacock!” or talking to the coach while she lectures, as if nobody else is in the room.

Somebody wise once told me Joaquin didn’t come here (to Earth) to look and act like everybody else. He is truly magnificent. Truly unique. Truly exhuberant. Like all kids are before we teach them how to be.

So I’ve watched the stimulus and my mind wrestling between my son sticking out ungracefully, being so different, and the reframing stories I’ve created to balance my perception and watch from a more neutral place. My mind (and face) have grimaced a few times wishing he had handled that one a bit more gracefully. I’ve exchanged reaffirming looks and words with Merle (who does not seem to be bothered in the least by the diversity my son brings to her class). And last class I asked myself a few questions and discovered that when I’m in discomfort, it is because I’m afraid that these kids may decide not to like Joaquin. I fear these kids! So I went to the worst case scenario: What if they all secretly ask Merle not to play with him?… Well wouldn’t that be heaven for Joaquin? A whole lane for himself? Three or four games while everybody gets to play only two?… Ha! ha!… Let’s not go there.

What came to me after a couple moments of reflection was:

Who would you be if you were watching this class and none of these kids was yours?

And I was able to watch them all, love them all, cheer for all, notice their sweet responses in success and failure. I noticed Brody’s magnificent finish (how he holds his arm up like a bullfighter until he sees the pins fall), how he celebrates himself… And Kenzie and I had a fun exchange about that. And Jackman started to look with smiles for my response every time he rolled a nine when he wanted a strike. And Isabel started to glance at me (trying to hide a smile). And Joaquin was of course such an interesting one to watch because he plays so beautifully and he scored three strikes.

I had a great time. And I made friends with the kids.

Eleven is a bigger stimulus than three. I knew the Universe would deliver increased complexity as we take these steps up the social ladder. I’m having a ton of fun debriefing with Kiki after every class. Tickling and gently coaching him on how to be more patient, more sensitive to other people’s feelings, more friendly with the quiet ones to sit at his table.

The other day I cracked up as I heard myself utter a word I have not heard since school. “Sapo” (tr: frog). We used to call “sapo” that kid in the class who knew it all and was always raising her hand to let us know.

Okay Joaquin, now, because this is the second time you take this class, it is possible that Merle will teach things you already know or have heard her say before… So you gotta hear them again because the other kids haven’t… And I don’t want to hear a little voice yell “But dude!” –Merle is not a “dude”, by the way– “… you don’t have to tell us that because you already have!”. No Joaquin, you will not be that sapo.

Oh, how we laughed…