Time to climb, stretch, and reach.

You know who has been –for YEARS– Rapidly Prompting me to engage my attention and reasoning skills to verbalize answers to content he likes to discuss (but I don’t)?

So it seems only right and timely that now I’m Rapidly Prompting him to engage his attention, active listening, and reasoning when I read for him. Not because reading comprehension is a Common Core standard that should happen for him now. But because, through my experience witnessing this child develop and participating actively in this process, I’ve learned this: When a brain is stuck for years in a certain area (like his listening in certain situations has been, only taken 0-2 tiny steps in the last two to three years), helping it start to perceive subtle differences –stimulating him to exercise a neurological muscle that has almost never been exercised– unleashes quantum leaps not only in the area under focus but in many other unexpected skills. And when that happens, it is like watching fireworks! The brain is the most amazing thing.

Two days ago I woke up and did a brief check in with Joaquin’s soul. I asked him what he thinks of what we’re starting and how to go best at it. Two clear images came to me without much delay. First I saw the porch of a house. Through the front windows, which had wooden slats providing partial privacy and view of the inside, there was a light. It glowed warm and cozy. It looked like I wanted to come inside. I was standing out, noticing the light, where it was, the desire to reach this place, but in order to get there I needed to climb some steps. Not two or three; more like ten or so. The little “heaven” was near, very close, and there was some climbing to do to get there. Then I saw a male figure –mostly his hands. he was close to a table, but in order to touch it he had to stretch. He was reaching the surface of the table with his fingertips. It was a stretch. And a success.

I knew the message told by these images:

We’re close; we’re almost there… and in order to get there we need to make a little effort. Nothing titanic; it’s just a staircase away. A big body stretch away. Do it. Reach for it.

It’s been four nights of bedtime reading using an RPM format, and Joaquin has told me that he loves it. I am in eager (though calm) anticipation of how this new little stretch coming into our lives will move all the pieces. My brain also loves to learn and apply new things. It makes me feel purposeful, focused, and ALIVE! 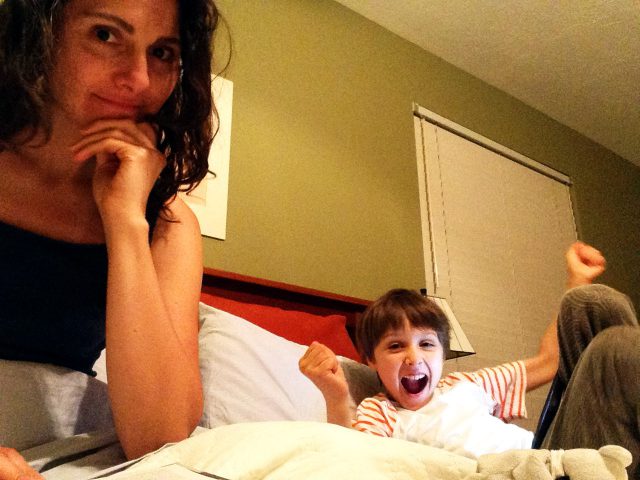