During the time Joaquin and I have been working on his GoT-inspired TV show, he’s been watching both of our previous “serious” filmmaking projects (Leon and Shark Wave) with a critical eye. One thing he concluded is that this time he wants better and more realistic sets and environments for our story. He doesn’t want our home to show in the finished product, nor does he want crude bed sheet stages.

With this new requirement our plans for scenery have centered around our familiar use of green screen video with background photos, and new to this project: Building environments with lego bricks and compositing photos and video of them with green screen footage of our characters, who are much larger than lego scale.

I must confess: This new twist and challenge sounded very exciting to me. I’ve wanted to try using lego buildings as video backdrop for a very long time. So when I noticed that our enthusiasm for storyboarding and costume making was diminishing, I decided it was time to refuel by starting to build a set and experiment with it to see if our happy plans were feasible.

The work began with Joaquin’s involvement building the first set: An alley of medieval building facades for the fictitious city of Tardar, where our story begins. He started the design through his ongoing Lego Wars tournament, with Enrique building for the challenge “decorated vignette”:

This first building established the style for the whole set, and I joined the effort; together we built a lineup of various facades. My idea was to connect some of them to create a curve, and lift the foundations for a gradual upward slope. I imagined the character walking through the alley, slowly climbing and turning corners to reveal quaint buildings on his way to the first action spot. We built it and then I tried to shoot some video in it.

Crap! This is going to be very hard!

In this scene our main character walks through this place while a rainstorm begins to unfold. He performs a heroic act and then runs back with a pair of dogs following behind him. I also dreamed of a cobblestone ground. Clearly, the slope was going to be very hard to cover with little rocks, and synchronizing the movement of the camera with the characters would be mission impossible given my amateur skills and tools.

But, although some of our pre-production audience commented that this project would enrich us with lessons on simplifying our goals and being flexible in aim for achievable results, neither Joaquin nor I were willing to give up so soon on all of our artistic dreams. And this is where Bollo temporarily came out of the project—his geek mom needed to experiment a lot more in search for solutions and a work flow to execute our plans.

First, a couple of set adjustments needed to be done: 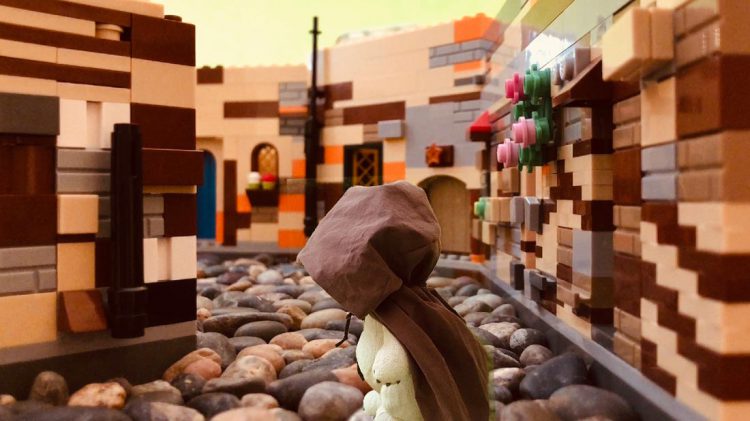 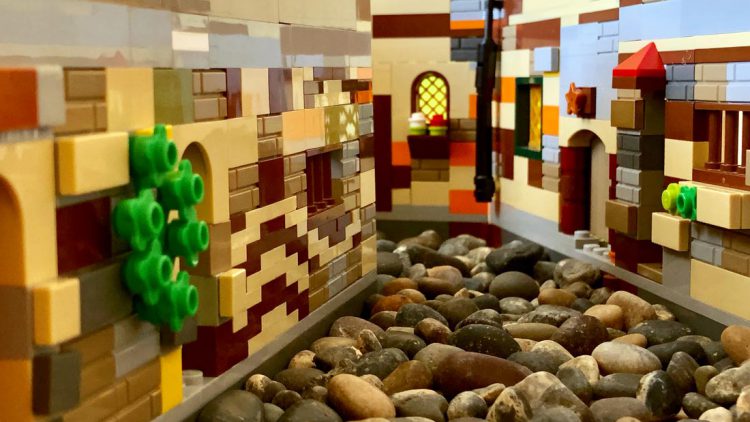 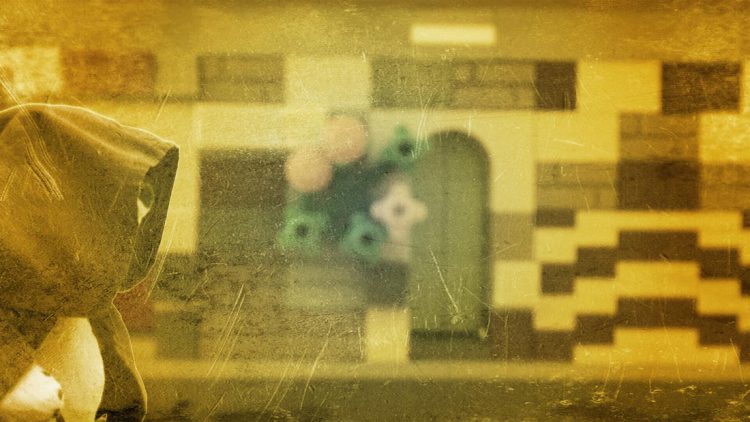 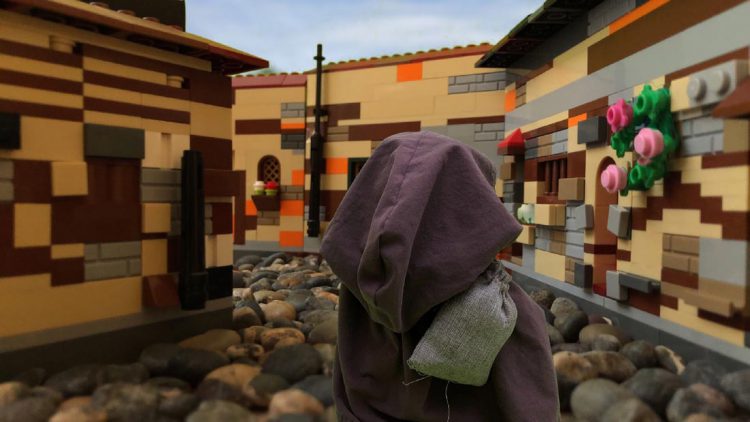 Our need for working space and controlled lighting also became very obvious. In order to make backdrop video to create the illusion that characters are moving within this real physical set, my plan was to try some stop-animation. Natural light, with his infinite constant change, would not be suitable for this plan.

So over a weekend I created a dedicated “movie studio” space in our basement. I let the Internet teach me some basics about lighting for film and photography. I played and experimented bouncing and diffusing light, and testing our apps with the lego buildings and the green screen. 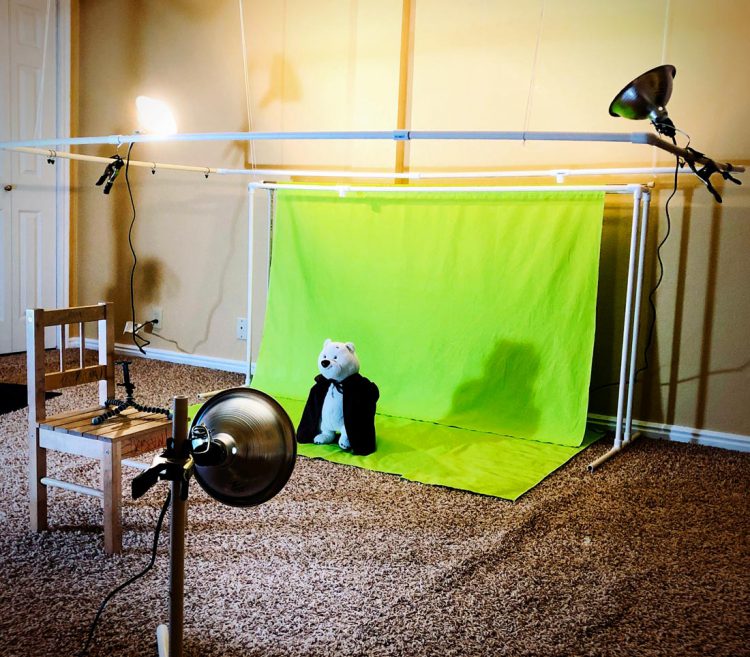 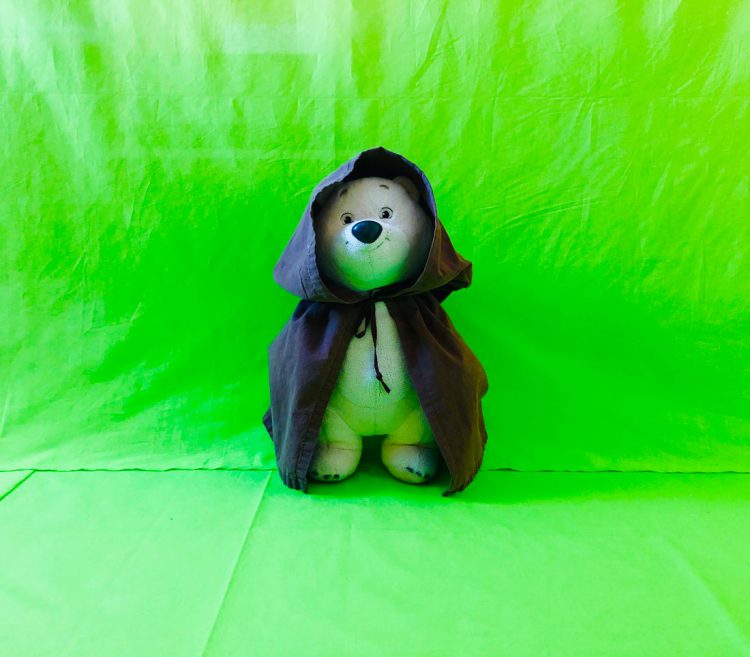 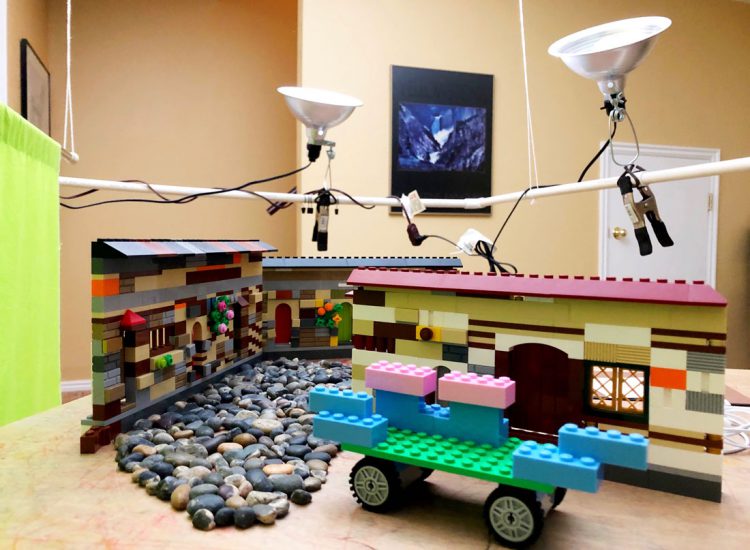 With our studio ready and after a few experiments, I brought Joaquin back in to create a few animations together. He didn’t feel confident in his ability to move the camera in even tiny steps, but was happy to help pressing the remote shutter. In reality Joaquin was a lot more interested in Lego Wars than the trial and error process of this stage of the project, so despite his confessed guilt he let me working alone several days shooting the scenery. 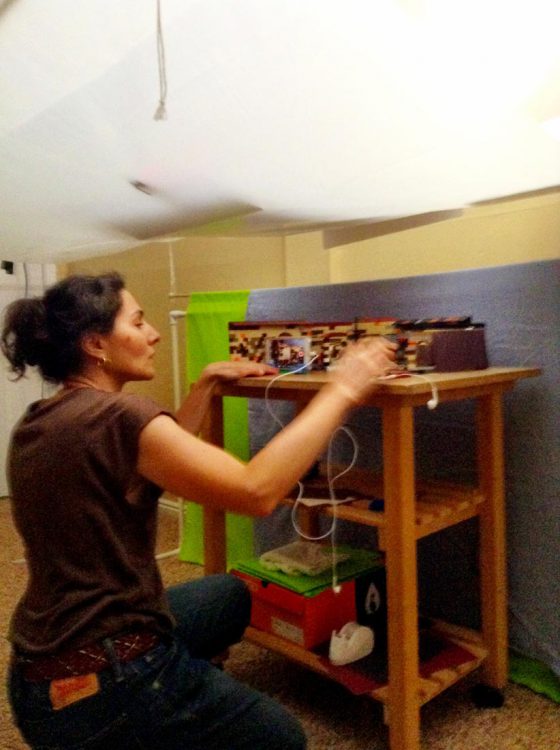 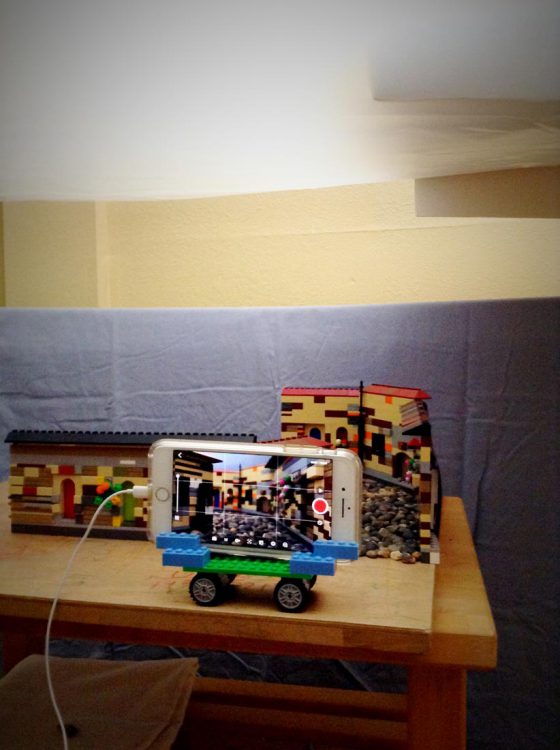 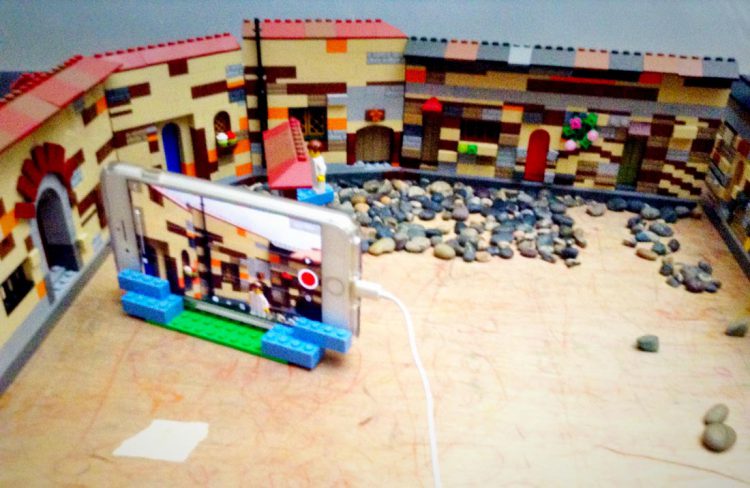 After capturing all the images and video I expected we needed for this sequence, I started looking for stock photos. Joaquin and I had used pictures of San Gimignano as our initial inspiration for Tardar. We needed a distance view of the city at sunset (with a storm approaching), and sunrise.

I realized the cost of stock photography these days ($5-$10 per image) and decided that our project would not rely on it: Any background photos we need we will build. And so, I built a micro lego model for Tardar. It was fun to photograph it and play with Photoshop to create the atmospheres we were looking for.

With this concluded and Joaquin’s emerging interest to get back in the project, our next step is to shoot video (or stop-animation) of our stuffed actors and mix it with the footage of the scenery. Given the difficulty I expect for this task with our current tools, I’ve procrastinated over a week and ultimately decided: It is time for me to learn Adobe After Effects. Sigh.

Who am I kidding? iMovie and Green Screen by Do Ink won’t have enough power to help us execute our intricate plans. It’s time to climb a new learning curve and bring in the big guns!

Here’s a video with raw footage of our tiny movie set in action: